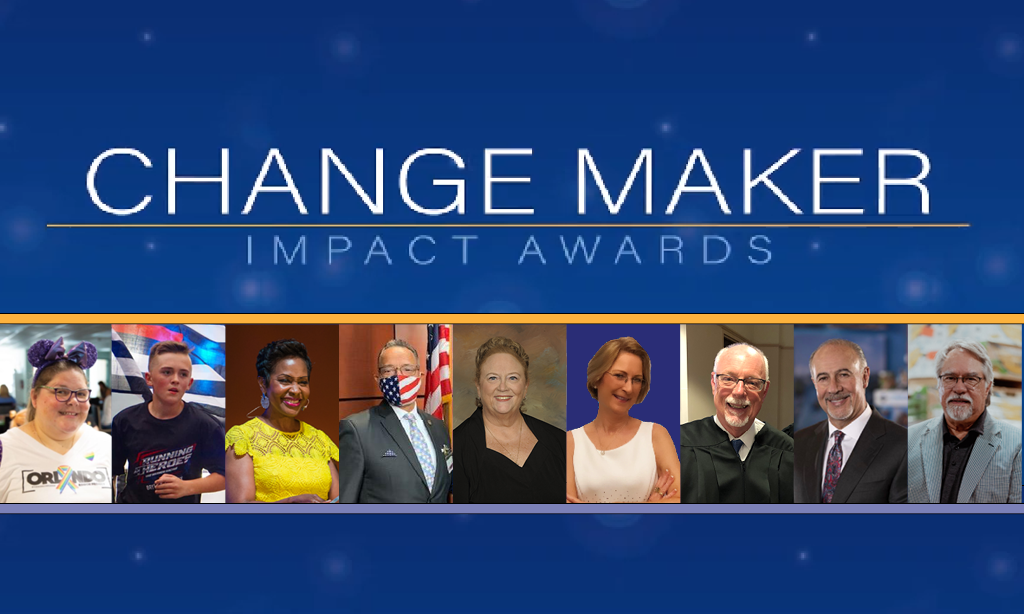 In all corners of the Central Florida community, people are making a difference. Through the 4th Annual Change Maker Impact Awards, Heart of Florida United Way honored passionate individuals and organizations who have contributed significant and lasting change in the community over the past year. The event recently unveiled the four Community Choice honorees and highlighted six individuals honored with the LIVE UNITED Impact Award for Leadership and the Change Maker of the Year.

“The devastating effects of the COVID-19 pandemic have deeply impacted the education, health, and financial stability of Central Floridians, pushing families to the brink of disaster,” said Jeff Hayward, president & CEO, Heart of Florida United Way. “But Central Floridians always have a remarkable way of caring for each other. There are always dedicated people and organizations who respond by donating their time, talents, treasure and voice to help those in need. This is exactly why Heart of Florida United Way started the Change Maker Impact Awards four years ago. Every single one – and those who were nominated through the community – deserve to be recognized for their efforts across our community.”

The honorees from the Community Choice public nominations were revealed during the event. The Mission United Impact Award recognizes a champion for Veterans, or an outstanding service member who has contributed significantly to serving veterans and being a positive change for them in Central Florida. This is a new category to the awards and it went to Fred Robinson, retired U.S. Marine and veteran liaison for Vitas Healthcare.

Robinson volunteers, educates, and supports veterans regardless of time, cost and recognition. With relationships throughout the veteran community to the Pentagon, he is known for lifting his voice to advocate for the veterans of Central Florida, making a difference in their lives at a critical time – end-of-life care. Robinson performs Bedside Salute Ceremonies at all hours of the day or night and created a drive-thru, COVID-safe, Pinning Ceremony for Vietnam Veterans. He is dedicated to ‘serving those who served.’

The WOMEN UNITED® Impact Award recognizes a woman leading and inspiring change in Central Florida. This individual leads with purpose and has a solid commitment to serving others, empowering neighbors, and impacting the community. This, too, is a new category to the awards, and it went to Secily Wilson, founder of W.O.W. Legacy Group.

Wilson empowers other women daily through her positive messaging. As a stroke survivor, she is an unstoppable force for changing perceptions, challenging paradigms, and helping all women. Wilson has always been there for women throughout the community, reminding them that when they fall, they can get up stronger and better than before. As a result, she coined the phrase “fall into fabulous” and has successfully led the W.O.W. Legacy Group.

The Change Maker Junior Award celebrates contributions to Central Florida made by the region’s youngest leaders. Zechariah Cartledge was nominated by Orange County Sheriff John Mina, who was given the privilege to honor him. Cartledge always had a deep respect for first responders and developed a passion for running at the age of five years old. By the time he was seven, he had begun competing in various 5k races across Central Florida. After participating in the Tunnel to Towers 5k in Orlando, he decided to create Running 4 Heroes, a 501(c)(3) that honors every first responder lost in the line of duty. It also supports those injured on duty. Cartledge also runs one mile carrying a flag in honor of the fallen officer.

The Unsung Hero Award recognizes a person or organization making significant contributions to the Central Florida community when no one is looking. Jen Vargas was recognized for her humble service and broad dedication to the community. By day, she’s a producer in film and television. By night and during her spare time, she volunteers for various organizations – American Cancer Society, Give Kids the World, Second Harvest Food Bank of Central Florida, and Coalition for the Homeless. During the pandemic lockdown, Vargas also was a volunteer driver for Orlando Face Mask Strong and the Million Mask Challenge, helping to get hand-sewn face masks to local hospitals and organizations that were in urgent need.

Vargas is also an advocate for equality and inclusion and is one of the original Pulse Angel volunteers, appearing in memory of those who tragically lost during the incident by wearing eight-foot PVC wings. In addition, she is “producer, host and heart and soul” of FilmSlam at the Orlando Museum of Art; and is a champion for family caregivers and advocate for self-care.

Finally, the Change Maker of the Year was awarded to Heroes in Education. Hayward said, “This year, our Change Makers of the Year will be awarded to Orange, Seminole, and Osceola School Districts’ instructional staff, administration, and support professionals. They are our educational heroes day in and day out. Not only were they tasked with educating our children in an all-new way, but they also played the role of advocate to ensure children’s and families’ basic needs were met. Additionally, they put their health on the line through the pandemic. Our local Heroes in Education have shown their commitment to our community, our children’s education, our families’ well-being and have remained adaptable through it all. This is why they are our Change Makers of the Year.”

To learn more about the event and to see past award recipients, visit hfuw.org/changemaker.